(Translated from the Spanish original by Elwin Wirkala)

The Encounter won second place in the 3rd edition of Books into Movies Award, the prestigious

The Encounter  weaves a story of adventure, romance, immigration and the social realities of Latin America, beginning with the infamous dumping of toxic waste into the pristine Amazonian jungles of Ecuador by the Texaco oil company. While describing the origins of this crime, The Encounter is also the story of Rosa and Ernesto’s search for cultural and individual identity. 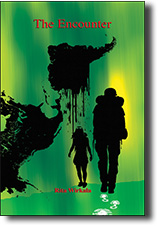 “Rite of passage travelogue, social criticism, denunciation of environmental disaster, these are some facets of this ambitious novel. The protagonists, developed on a double plot structure, are Ernesto, a mestizo youth adopted by a Spanish couple residing in San Diego, and Rosa, a Huaorani girl from Ecuador. The symmetries and vicissitudes experienced by each are interwoven in a narrative that brings them together for just one meeting on a single fleeting, splendid day. Ernesto travels from north to south in search of his origins, but what he finds is redemption for his adoptive father, who is implicated in the pollution of the rain forest. Rosa, for her part, leaves Amazonia behind and sets off northward in response to a call from her ailing mother, who immigrated, years before, to Oregon.Both itineraries, with attractive and convincing characters as center of gravity, inspire passion.”

Review from “The Pirate Tree”

ONE GENERATION’S CHOICES TAKES TWO TEENS ON A JOURNEY OF CONNECTION, by Ann Angel

When paths cross even briefly, our lives can change in surprising and important ways. For Ernesto, a mestizo youth adopted by a Spanish couple living in San Diego, and Rosa, a Huaorani girl from Ecuador, coming together for a single day leads to redemption and understanding. This novel takes readers on a journey that begins with Ernesto searching for his birth family to discover that his own rite of passage will weave together with a story of environmental disaster and reveal social and family issues that include finding the truth, seeking solutions and loving the imperfect people in our lives.In a parallel journey, Rosa leaves the Amazonia behind and sets off northward in response to a call from her ailing mother. The author portrays these characters with understanding and sympathy.
Rita Wirkala is an Argentine bilingual writer and a professor at the University of Washington. Her work has been published in Europe and the United States, and acclaimed by a major Spanish language newspaper. She writes young adult novels in Spanish and English, poetry, literary essays and school and homeschool textbooks. She is also a translator of children’s books, and composer of children’s songs, and the founder of All Bilingual Press.

TALES FOR “THE DREAMER” (HoopoBooks) 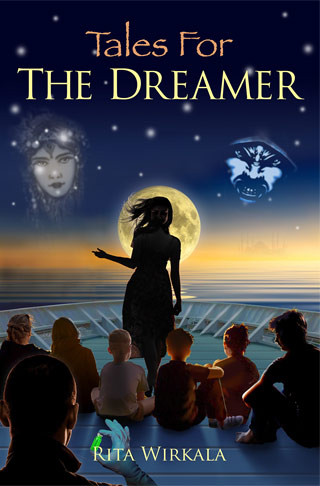 PRESENTATION OF “TALES FOR THE DREAMER”  at Elliott Bay Book Co., Nov. 2018

Tales for THE DREAMER follows the ancient tradition of telling stories within a story—as in Homer’s Odyssey, The Arabian Nights, Chaucer’s Canterbury Tales and India’s Mahabharata and Panchatantra. But unlike earlier collections, Tales for THE DREAMER has one foot in the past and the other in the future. While its frame story (the overarching tale that holds the others together) takes place in the year 2036, the stories within it date back hundreds of years and represent a genre that educators and psychologists say can offer benefits beyond the usual entertainment, provision of information and inculcation of moral. These “extra” benefits include a unique ability to foster social-emotional development, thinking skills and perception in readers of all ages. That’s why such tales—which once were a common feature of all cultures—are known as teaching-stories.  The stories included in Tales for THE DREAMER were taken from a variety of sources such as the Masnavi, a book in verse by the thirteenth-century Persian poet Jalaluddin Rumi; The Arabian Nights (also known as One Thousand and One Nights); and Don Juan Manuel’s Tales of Count Lucanor, a fourteenth-century Spanish collection of Eastern origin also known as Book of the Examples of Count Lucanor and of Patronio. Many of these stories have also been retold in recent years by the author and educator Idries Shah, who specialized in collecting traditional tales of this kind (see www .idriesshahfoundation .org/books/ and www .hoopoebooks . com/teaching-stories-by-idries-shah/) .  I used two main criteria in selecting stories for Tales for THE DREAMER: that they should be largely unknown by the general public, and that they can offer benefits beyond the usual entertainment or moral lesson

The book is beautifully illustrated by the Argentinean artist Mónica Acosta Rodriguez.

Review by JonArno Lawson, award-winning author of The Playgrounds of Babel, Inklings, The Hobo’s Crowbar and other titles.

“Tales for THE DREAMER is a real page-turner. By setting it in the near future while making use of the best storytelling traditions from the past, Rita Wirkala has created something unique, enriching and thoroughly enjoyable for young adults and adults alike.”

Review by Roger Clement, Member of College of Physicians & Surgeons

Folktales worthy of The Arabian Nights

The folktale is the primer of the picture-language of the soul. – Joseph Campbell

Set in 2036, The Dreamer is a ship bringing scientists from Europe, Africa and the Middle East to an antarctic island to study the effects of climate change. The story can be viewed on multiple levels, and “The Dreamer” also may be viewed as the reader or listener allowing themselves to be drawn into the action.
The author, Rita Wirkala, a native of Argentina, draws her story from her travels, her years studying the extensive Middle Eastern influences on Spanish medieval literature, her enjoyment of folktales, and her more recent experiences working with young writers.
Tales for the Dreamer contains a quest within a quest in Arabian Nights fashion. Our hero and heroine are young teens, Jamal and Zeina, on their own mision to find storytellers and gather folktales while The Dreamer is picking up scientists for their new life on the island. The story has enough danger and excitement to keep the reader engaged, and the main story is interwoven with folktales gathered by the teens. I particularly enjoyed “The Story of Maiden Teodor” and “The Book of Apolonio,” two of the stories Zeina tells showing creative ways to get out of difficult situations.
The book is perfect for the young reader, for those who just love folktales, and for anyone lucky enough to have a child to read to. I highly recommend the Notes and Bibliography section which ties each chapter of the story to facts about each region visited, and each folktale is illustrated by some of its parallels and history.

An adventure story full of stories

It’s the year 2036, and to a reader from 2018, there is initially something of a dystopian quality to how the world seems then, the world of Tales for the Dreamer, by Rita Wirkala. Paper books are not now allowed to be published…because wood is in short supply. Icecaps have melted, seas have risen,
rivers dried up, crops scorched. But then, there are flying taxis…and even flying skateboards. So it’s a world of contradictions, of technological progress and increasing strain on the ecosphere. And it is within this frame that the voyage of the Dreamer takes place, a ship which travels the globe on a journey to Antarctica, with a crew from all around the world,with their families, and including the young Jamal and Zeina. As I read the book, I thought that indeed this would be an excellent choice for school students’ required reading; original, expansive, accessible and inclusive. Particularly, the numerous traditional stories that are woven into the fabric of the main story seem as though they might be of great potential value to readers young and old. As someone in fact kind of old,
I enjoyed the story itself, and was glad to be able to read the very interesting notes at the end of the book as well. Tales For the Dreamer is an adventure story that is both fun to read and full of nutrition.

The story’s plot is excellent and suspenseful, and elements that might seem far-fetched for the near future are substantiated in end notes which also give interesting information about places in the near and far east where the action takes place. I really enjoyed this book and have ordered copies for young cousins.

I am a senior citizen so I will not see whether Wirkala’s predictions of 2036 will ever come true. But this does not matter.
The book is SO inspiring; besides its captivating plot it has so many tales interwoven into itself that it opens the reader’s imagination to a wide range of possibilities.
If Professor Robert Ornstein is right (and, judging from his many enlightened books about our human psychology – the easiest to read is his last one, MindReal, he is right) then such stories are schemata of how our minds work, and help us think more creatively and efficiently.
This book may help many young adults to become not just smarter and kinder but also wiser in a deeper sense of catching glimpses of the purpose of life, of going beyond our physiological pleasures (without denying them) and into a realm of more refined thinking about the world and ourselves.